I got a call the day after Christmas 2008 about a pair of kittens that had been found abandoned on Christmas eve under a bush in the snow. These guys were two of the sweetest kittens and had been through some really awful experiences in their young lives. They had a severe case of ear mites as well as eye and upper respiratory infections. 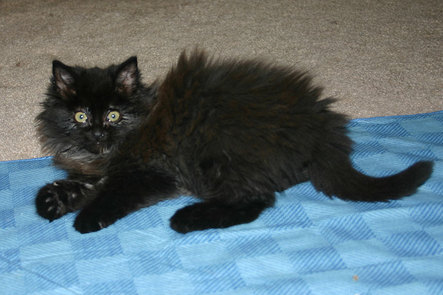 Sean was the smaller of the two kittens and had some kind of neurological impairment. He had difficulty holding his head up and had a bit of a starboard list when he ran. I described him as running around like a drunken sailor. At the shelter, they had taken to calling him Bobble Head. Despite the motor control issues, he was just like any other kitten and loved to play constantly. In fact, he was so insistent in his desire for play that occasionally his sister would simply jump up out of reach in order to get away from him.

I had to bring him back to the shelter several times as they ran various tests on him to try and determine the cause of his neurological issues. Even though they were never able to conclusively settle on a cause, it appeared that whatever it was, it was not life threatening and he would likely live out a relatively normal, if somewhat wobbly, life.

As a result of his numerous trips to see the vet, the vet tech ended up falling in love with him and adopted him. She renamed him Stevie (after Stevie Wonder--I think you can guess why....). She also had a young dog. Before long Stevie and the dog became inseparable friends. The dog would carry Stevie around in his mouth. When the dog would get tired, Stevie would go wake him up so he could play some more. All in all, it turned out to be the best possible place for him to be. 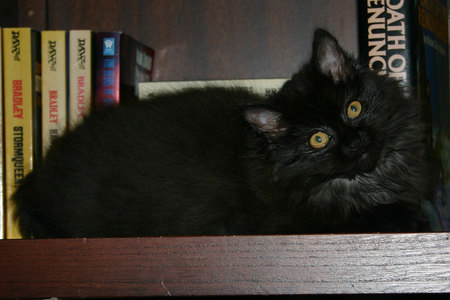 Fiona was larger and generally appeared to be in better shape than her brother. Other than the treatments for the ear mites, and URI, she was  a model kitten. That is until her spay surgery.

Unfortunately things did not go well and she had a bad reaction to the anesthesia. After coming to, she began vomiting and having a severe case of diarrhea, so bad they had to shave her backside in order to make cleanup easier. She had also stopped eating.

Normally when a kitten is old enough for their surgery, I will bring them back to the shelter and, once recovered from the medical procedure, they are put straight out on the adoption floor. However, because of how poorly she was doing post operatively, I was asked if I would take her back home with me. The poor thing was in awful shape. I was having to mix kitten formula with puréed chicken I got from the infant aisle in the grocery store and had to force feed her this mixture several times a day. I was even spending my lunch hour at home to tend to her.

Day after day for almost two weeks I struggled trying to get her to eat until, finally, she started eating on her own again. You can't know how ecstatic I was to see her finally gain the strength and desire to eat on her own. She was now also starting to have regular bowel movements, too. However, she was still having issues peeing. It was like she wanted to but little, if anything came out most of the time.

What I hadn't been told was that at a prior examination, the vet had felt a mass in her abdomen. Upon re-examining her, the mass was still present and they decided, despite her past experience with anesthesia, to do exploratory surgery. It turns out she had a granulated mass (i.e. scar tissue) that was all throughout her abdomen and was interfering with her urinary tract. Even though the prognosis for a positive outcome were slim, they attempted to remove the mass. Unfortunately, she died on the table.

It was the most devastating loss of a kitten I've ever experienced. I had no idea before she went under the knife for the second time that she was going to have another operation. I had gone from elation at her eating on her own the day before, to the ultimate loss with absolutely no warning. I was not prepared for her death in any way and had missed the opportunity to say goodbye to her, naively believing I would be seeing her again in a few hours.

It taught me one lesson, to always treat each parting as though it may be my last.