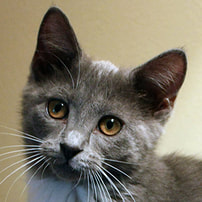 Hazel, as she was originally named, was born at the shelter on May 19. 2011. Her mom arrived there pregnant and before her foster mom came to collect her, she went into labor and had 6 beautiful little kittens, 3 boys and 3 girls. When they were about a month old, the foster mom had to go out of town for several weeks so I agreed to take them. I also got the opportunity to name them. Since their mother's name was Electra, I decided to name them all after characters from the play, "Mourning Becomes Electra". They stayed far longer than originally anticipated because when they were ready to go back to the shelter and be adopted, there was no room for them due to the influx of kittens and the lack of adoptions going on at the time. It was during that extended stay that Hazel won me over and I decided to keep her. I was able to complete the adoption on September 11, 2011 during an Adopt-A-Thon at PetSmart which enabled the shelter to get an extra $35 donation as a result. Hazel's name, while cute as part of the "theme" of the litter, is not one I was fond of keeping as a permanent member of the household. For one thing, you'll notice that all my other cats have names of Celtic origin. Plus, every time I think of Hazel, I flash back to the frumpy housekeeper from the 1960s. I blogged about changing her name and even posted a list of names I was considering and gave people an opportunity to vote. There was a three way tie between Arwen, Vivian and Ainsley. In the end, I went with Arwen.

Arwen and Caitlyn were never exactly the best of friends. Caitlyn hissed, growled and smacked Arwen around. She'd done it so much that Arwen, at first just trying to present the passive, "I'm not a threat" position, began growling and bating at Caitlyn. So, I had the girls spend some "quality time" together in the former kitten room. One in a cage, one free roaming in the room. I would alternate which one sits in the kitty "jail" each day. Each evening, they would  spend some time together free roaming in the room with me and my clicker and some treats trying to get them to accept the presence of each other. It was slow going. While there was some progress, eventually it got to a point of diminishing returns so I had to give up on the idea of them becoming friends. Sleeping arrangements were in flux for some time after Arwen had free reign in the house. Sometimes Caitlyn would sleep with me in her usual spot, sometimes at the foot of the bed and sometimes in a kitty bed under my bed. Mostly Cait slept on my chest/torso with occasional visits by Arwen down around my legs. However, Caitlyn was quick to let Arwen know she was not welcome if the two were in close proximity.

Caitlyn seemed to be of the opinion that if the children from the Village of the Damned had had kittens, that Arwen would be the pick of the litter (shamelessly stolen from the Sylvia cartoon).

At least the boys adapted well to her. Arwen and Galen regularly played together and, if she offered him the top of her head, he would start licking her. Duncan even responded occasionally with some head licking when she made the gesture in front of  him. Usually he would tap her on the head with his paw and run away.

Arwen also decided that it's fun to visit me in the shower. She'd sit on the side of the tub and meow pitifully at me begging for attention. Or she'd try walking around the edge, licking up water. On occasion, she'd even jump down into the tub for a few seconds. Usually, by the time I was done showering, she'd be pretty soaked. But she loves being toweled off so maybe that's the inducement to getting covered in water. Her other trick is opening and closing the master bedroom door. She's also tried that trick on the downstairs bathroom door only to lock herself inside.

Here's a video of her door closing ability:
After the deaths of Galen, Duncan and Caitlyn, Arwen became the queen of the house. And like Caitlyn, she has decided that new comers are not welcome, at least not of the feline variety. She is okay with visits by other humans, so long as they're not too loud or move too quickly. If they stand still she will eventually come up and rub  herself against them.

Since working from home due to the pandemic, Arwen has been a regular visitor to my desk, especially when I'm on a conference call with my coworkers. More than once she's mooned everyone on a Teams meeting.