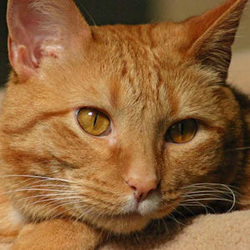 May 3, 2013 - March 20, 2015. Galen was your classic orange tabby. He had a little marking a the corners of his mouth that, from the right angle, made it look like he had a permanent smile on his face. Like his brother, he sported a little white mustache (ala, the "Got Milk?" commercials) and white toes. I called him my little love bug. He loved being petted and would flop down on his side on the floor and stretch out to entice you to pet him. If he thought you're being lax in providing him attention, he'd come up and butt you with his head. Galen was something of a klutz. He'd fallen off of just about every piece of furniture in the house. Once, when I flushed a toilet, he came running at break neck speed and leapt up on the toilet seat but wasn't able to stop himself in time and fell off the other side. As kittens he and his brother loved to play and chase each other around the house. They'd sleep together and groom one another, though now that they are older, they don't usually sleep with one another. Play and grooming one another diminished over time but when they did, the grooming will often turn into a play session, first a few licks, then grab the other with their teeth, tussle for a bit and then stop to lick each other again.

﻿Galen ﻿also liked to burrow into things, particular of a clothing nature, even when I was in them. I have a pair of very stretchy workout pants. When he was a kitten he'd paw at the cuff until he could get his paw inside the pant leg. Then he'd crawl inside (I did say they were very stretchy). Once he crawled up one pant leg and down the other. He'd crawl into my shirt and poke his head out the neck like a periscope on a submarine. After he got too big to do that, he would jump into the laundry basket full of freshly cleaned clothes or under the sheets as I was trying to make the bed. As for toys, anything with feathers or fur was sure to get his attention. However, even a spot of light would do. He'd chase the light from a laser pointer or even the reflection of sun off a tag on one of their collars. He also liked to pounce on my shadow on the wall as I climbed the stairs. When playing with a cat teaser, he'd lie in wait under the skirt of a nearby chair and make a surprise attack, grabbing the feathered end and rolling over on his side to deliver the "fatal" bite. Any kind of feathered toy was usually chewed to pieces in a few weeks. Furred toys would become soggy from being mouthed and chewed. Once he ended up chewing a fur ball until there was nothing left of it. He was also fond of bringing his toys to bed with him.

In November 2014 Galen developed cardiomyopathy and congestive heart failure. He spent about 36 hours getting oxygen supplementation while receiving medication to help his heart function more efficiently and diuretics to remove the fluid in and around his lungs. After stabilizing from that, he developed kidney problems. Whether it was from a blood clot caused by the heart condition, the medication they gave me to help his heart or a secondary infection, they didn't know. So for a week I took him in every day to be on IV fluids. His kidney enzymes eventually dropped back into a safe range and he's been managing well with just the heart medication and diuretic. A follow-up visit a month later showed his kidney enzymes were doing great but he was starting to accumulate fluid in his chest again so the doctor gave him an injection of the diuretic and had me increase the dosage of the daily pill form. He lost a lot of weight while he was critical because he had no appetite. Fortunately that returned with a vengeance and his weight came back up. Unfortunately, that only lasted for a few months. By March 2015, it was clear he was beginning a slow return of his heart issues. He found going up the stairs to my bedroom too much of an effort and made his home downstairs in the living room. I moved a litter box as well as food and water bowls there for easy access for him. Finally, on the first day of spring as I was getting ready for work he got out of the cat bed and began making sounds of distress. At first I just tried to comfort him but when it was clear that wasn't enough, I called the vet's office tearfully explaining that I thought he was dying. They told me to bring him in, but by the time I got the carrier and brought it down (less than a minute later), it was clear he wasn't going to last that long. I just sat there petting him and crying. The vet's office was very understanding when I brought his body in for them to have cremated. They gave me some time alone with him and then, after taking him into the back, came back with a clay imprint of his paw, which I took home and baked to permanently set. The vet also sent me a hand written sympathy card.