I had a busy fall, fostering several cats/kittens, though mostly on a short term basis. 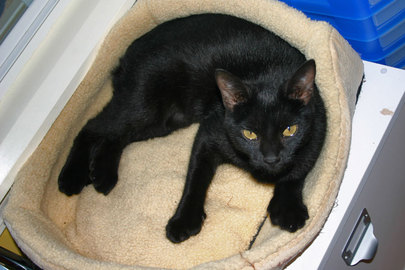 Hope was a short term foster. She came in under vaccinated so was only with me a couple of weeks at the beginning of September until we got her distemper shots up to date. She was an incredibly sweet, black polydactyl cat. Her friendly personality and unusual feet made her a popular cat and she was quickly adopted.

Kayla was one of my original set of 12 kittens that I had fostered in the spring/summer. She was adopted along with Schroeder before either of them was big enough to be spayed or neutered. It was common practice to allow very young cats to be adopted without having their neuter surgery provided there was a neuter deposit paid. The deposit was $100 and an incentive to get the new owners to bring the animal back as they would get that money back once the surgery was completed.

When Schroeder was brought in by his new owners for his surgery, they did not pick him up since immediately because they said "it was too far to drive, you keep him until we can get there." That was a bad omen. Kayla, being much smaller had to wait for several more weeks before she was big enough to be spayed.

The owners missed three specially made appointments for shots for Kayla, then did not show for her scheduled spay surgery. One of the volunteers said they had an odd email sent to the shelter's email address saying that the kittens were peeing and pooping everywhere, had diarrhea, and if the kids picked them up they pooped/peed on the kids. The new owners claimed they had called the shelter numerous times (though there was no record of their calls) and had taken the cats for several vet visits (questionable) and were "sick of it."  The volunteer tried to reach the owners by phone, but no calls were answered. Finally the shelter received a message that they had "put the kittens outside".

The volunteer finally managed to get hold of them by email and told them that it was against the law to let them loose, that their contract said they would have Kayla spayed and finish getting her shots. She managed to convince them to give up the kittens and then drove out to where the owners lived to pick them up. They were being kept in a cage in the garage with a litter box full to overflowing and no food or water. Both had bad diarrhea. The owners had the nerve to ask for their money back. Needless to say, they didn't get it.

After getting her distemper shot and spay surgery, she and Schroeder came to stay with me until we could clear up their diarrhea. A fecal exam revealed that they were both suffering from parasites, something neither had when the left the shelter. It took a couple of weeks but in short order they were back to full health and ended up finding new homes with people more worthy than their first adoptive family.

Bonzai was a kitten who was found by animal control. They needed time to make sure he was clear of any parasites and get him caught up on his shots. So, I took him and Titan, a kitten who'd spent months at the shelter in ISO being treated for a nasty abscess on the side of his head. He was going stir crazy at the shelter and needed to get out into a real life situation. Both kittens were great. Titan, a bobtail, was the most affectionate cat you could possibly want. Bonzai was just a maniac who loved to chase feather toys. He made the most fantastic leaps. I wish I'd had a video camera to capture them. They had a great time together playing. 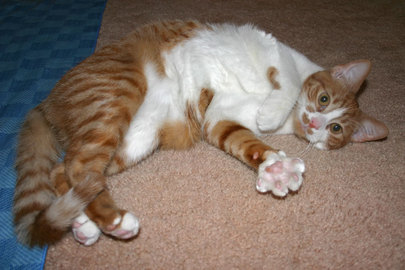 Domino was another kitten who, like Kayla, had been adopted but wound up back at the shelter suffering from internal parasites. He was a very loving and playful cat who hated being by himself. I don't normally allow the foster cats to mingle with the Resident cats, largely because they are usually being treated for upper respiratory infections or internal parasites. Besides, other than Duncan, the Resident cats are not fond of other strange kitties invading their territory.

The problem was that Domino would complain rather loudly if he could hear me in the house. So, I was usually in the kitten room (the front bedroom formerly known as my scrapbooking room) when I was home. After getting a clean bill of health on his fecal test, there was a delay of a couple of days before I could bring him in. The last night before he was to return to the shelter, I had some things I just had to get done and couldn't be in the room with him. Tired of hearing his cries, I decided to let him run loose in the house. So what does he do? He bee lines it to Caitlyn to try and play with her. She let him know in no uncertain terms that she was not happy, hissing and growling and sounding quite ferocious. Domino apparently either sensed she was bluffing or was too stupid to comprehend what she was trying to tell him and continued to press her.

So she ran away.

For Domino's part, he had scored big time. He proceeded to have the time of his life chasing poor Caitlyn all over the house. And while Caitlyn was none too happy about the turn of events, in the end she was unharmed, if extremely annoyed. The next day he went back to the shelter and after a couple of weeks found himself a new, loving home.