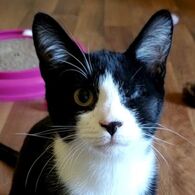 Liam is my second "foster failure". He started off as one of my Pandemic Foster Kittens. He went through a lot in the first months of his life, from an upper respirator infection that damaged his left eye, to a broken leg, surviving panleukopenia, to having surgery to remove his damaged eye. What with all the strikes against him, and the fact that he is terrified of strangers, I didn't want to put him through any more trauma and decided to make him a permanent member of the fur family.

He spent a lot of those early months in a large dog kennel as he recovered from his various accidents and illnesses. I also did a lot of hand feeding of him, either because his appetite would be lacking when he was sick or because standing was awkward with the overly large splint he wore while his leg healed.

He and Kieren get along great. I wish the same were true of his relationship with Arwen. Unfortunately, Like Caitlyn was with her, she's decided that if the children of the village of the damned had kittens, that he'd be the pick of the litter. And unfortunately, he insists on trying to make friends with her. He is drawn to her like a moth to the flame. Arwen lets him know in no uncertain terms that she doesn't want him near, but he insists on trying to interact with her anyway.

He's the only cat I've had that rarely purrs or at least if he does purr, it's so soft that it's impossible to hear. I have, on occasion, been able to put my ear to his chest and hear/feel the vibration. Mostly he communicates with varying qualities of meows. One of his favorite games is playing fetch with small toys. He'll bring them to me and I'll toss them down the length of the townhouse.

Although he does like having pets and belly rubs, he's not as physically demonstrative with his affection and will shy away from being petted if he walks by. Petting always must be done on his terms. In some ways he's like Duncan in that respect. Though Duncan would give signals that he wanted you to pet him but would immediately move away from you if you tried to follow through.

In the evening, if I'm working on a craft project in the living room, he'll wedge himself behind me on the recliner since I'm usually not sitting all the way back. Though if I'm sitting back with my feet up, he'll stretch himself out on my lap instead.

He's a sweet boy and I'm hoping that once he matures a little, he'll stop antagonizing Arwen or at least won't be so persistent about it. Kieren was the same way with Caitlyn and it took him a couple of years before he got tired of that game.