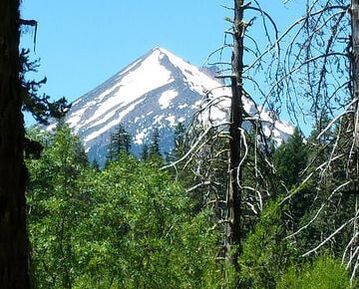 Mt. McLoughlin, Oregon 2017
I'm originally from the west coast (or left coast as some like to call it). After graduating college I first took a turn working locally before joining the Navy and getting stationed in the Midwest. After completing my required service, I decided to stay in the area and began working for several large companies as a technical writer. I've written documentation for everyone from the seasoned computer engineer to the average non-techie.

Helping animals has been a passion of mine and I've worked as both a shelter volunteer and a foster mom for homeless cats and kittens. In recent years I've also become an avid card maker. Like many crafters, I began dabbling in scrapbooking (a way to document much of my families old photos and the genealogical information I was gathering). Card making was a natural segue since both projects use many of the same materials. Cards are also faster to put together (usually) and have the added bonus of being a gift as well as a piece of snail mail.

This website contains bits of the things that I am most passionate about, writing, animals, genealogy, scrapbooking/card making, and even a bit of cooking.