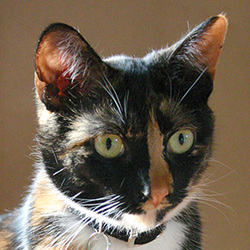 Caitlyn is my "unplanned child". I had gone to the pet store to get something for the boys. There was a shelter with a cage full of kittens they were trying to find homes for. The woman from the shelter asked me if I'd like to hold one, and, stupid me, I said "yes." Yeah, I know. I should just have the word "sucker" tattooed on my forehead. So it was no surprise that I ended up coming home with another addition to the household. I set her up in the front bedroom/bathroom area of the house. I wanted her separate from the boys until I was sure they could get along and that the boys would accept her. Duncan turned out to be no problem. He was fascinated with her from the start and wanted to be in the room watching her. Galen, on the other hand, wasn't so thrilled with the new arrival. His first reaction to her was to start hissing at her and to bat at her with his front paws. However, I'll give her her due, she stood up to him, poofing up her fur, standing up on her toes, turning sideways to show she was a "big cat" and hissed right back at him. Of course, she was all of two pounds at the time as opposed to Galen's 12 pounds. That didn't seem to faze her, though.

For the first week, I kept her separate and allowed the boys to visit only when I was in the room with them. Duncan would sit on a chair or across the room from her and watch her every move. She'd hide behind or under the furniture, run out, tag him and run back to her hiding place, her own sort of counting coup. That is until Duncan one day made a sort of "mah" sound at her as she ran towards him. She stopped in mid run and went back. After a couple of times of that, she stopped trying to "tag" him. When she tried to walk up to Galen, he'd jump backwards as if afraid she had cooties. It reminded me of the reaction of the monsters in the animated movie, Monsters, Inc., to the presence of the little girl. He would usually hiss at her before running off. It took some time, but eventually, he decided she was okay and accepted her. Now he loves playing with her and chases her around the house (much to her delight). He'll even lick her face from time to time.

Caitlyn is decidedly smaller than the boys, being half the weight of either male cat. However, she is far more energetic than they are. When she first arrived, she would sit in wait for one of them to walk by. Then she'd pounce on them and run off hoping they'd chase her. Galen will occasionally engage her though he just can't keep up with her speed and agility. Sometimes she'll tease him from the top of the banisters because she knows he doesn't have the balance to follow her up there. He tried it a couple of times and failed miserably.

Caitlyn was my constant bed companion. It began when she was a kitten and she spent her first night with full access to the house curled up under my chin. Every now and then she'd gently touch me with a paw as if checking to make sure I was still there. Over time, she moved "south" settling herself around my midsection. I typically start off sleeping on my side and at some point will roll over onto my back. All the while, Caitlyn would remain either up next to me, curled on the body pillow I hugged at night, or sleeping on my stomach or up by my shoulder. As soon as I got horizontal in bed, there she was.

As she got older, she became less tolerant of the other cats, especially after Galen died as he was her favorite. No amount of gradual introduction would sway her. Both Arwen and Kieren were rebuffed, quite vocally. Arwen learned to give her a wide berth, but Kieren was determined to try and get up close and personal. Eventually, to make life easier for her, I closed the bedroom door so that she had sole dominion over it. There was a litter box in the bathroom and food and water available 24x7. She could do as she pleased and not have to hide from the other cats. I wasn't fond of keeping the other cats out, but she was getting up in years and she became noticeably more frail as the years went by.

Never a large cat, her weight loss in the last year or two was significant. Although she received a clean bill of health when she saw the vet in the fall of 2020, just a few months into 2021 her appetite fell off. A trip to the vet confirmed that things were not well with her. In addition to her other problems she had developed a mass near her heart and fluid around her lungs compromising her breathing. Due to her age and physical condition, surgical intervention would kill her so, to prevent her from any further suffering, we decided it was time to put her to sleep. The one thing I miss most about her is her gentle weight curled up on my body as I would sleep at night.